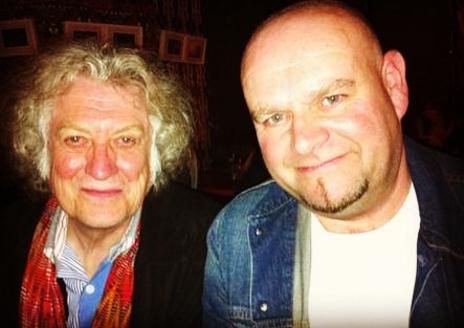 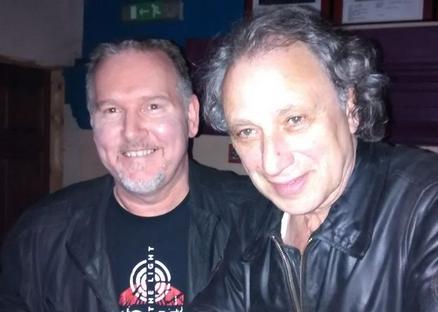 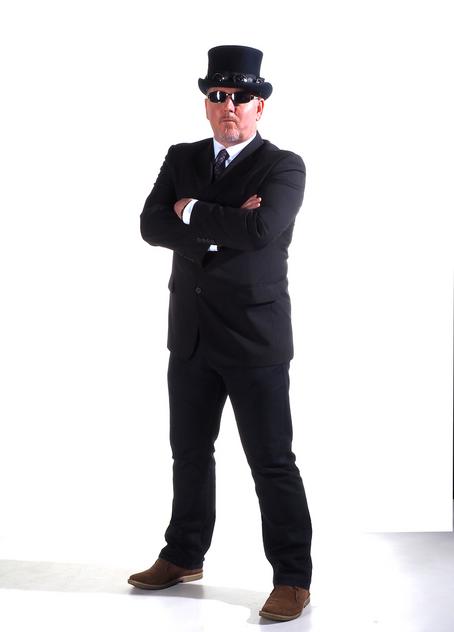 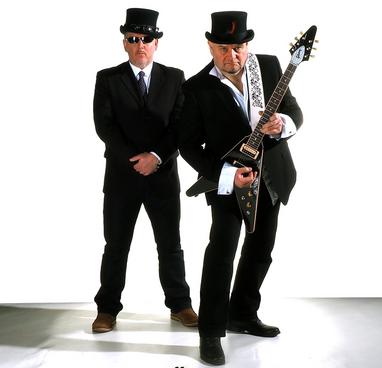 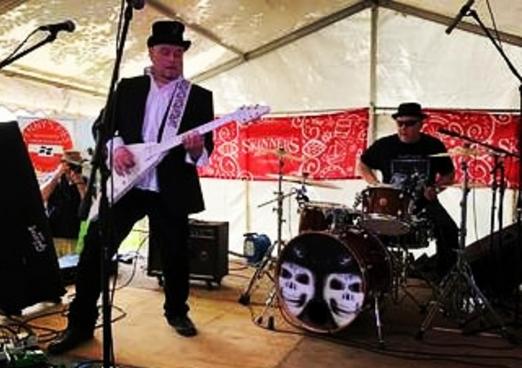 Geoff having a beer with Slade's Noddy Holder back in 2013.Noddy did reveal that he was asked to join AC/DC before Brian Johnson! 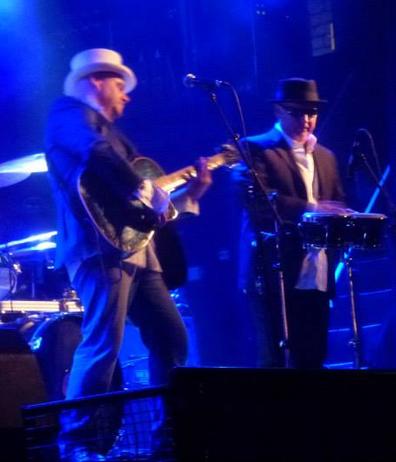 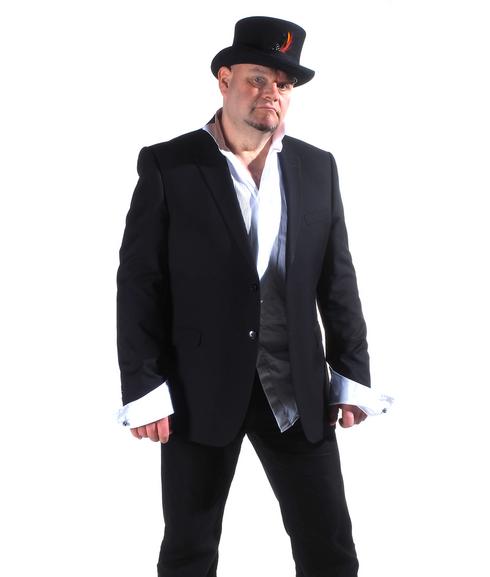 Mick is a born and bred West Londoner.Influenced early on by 60's acts/era such as the Beatles,the Stones,Motown/Blues,The Who where he heard the wild Keith Moon right through to the indie bands of the early 80's such as U2 and the Only Ones-Mick was bought into being a beatmaker! He quotes the likes of John Bonham,Keith Moon and Stewart Copeland as his biggest influences.

Today,while embracing the past he also lists the likes of the White Stripes/Florence and the Machine and even more recently the 'KIng King' guys as fresh influences.

Mick started out with the rock based Sacred Hearts in the early 80's who toured the regular London circuit venues (Remember the likes of the 'Rock Garden','Fulham Greyhound' and 'Marquee' in Wardour Street?) then in 88 forming stadium rock stylee 'Dream State City' with Geoff out of the ashes of Sacred Hearts touring once again the London circuit and also branching out further afield in the UK.

When D.S.C disbanded in 1991 Mick carried on with studio session work and occasional fill-in slots for bands until 2012 when hung his sticks up.

As the only holder of a live 'DSC' video that he put on youtube Geoff contacted Mick after finding the clips and now after 23 years they started to work together again under the "GC & the HatZ" Rock & Blues umbella! Mick hung up his sticks in Feb 2020 with his impending move to Cornwall in view.

P.S. Mick would like mention what turned out to be their penultimate last ever gig with their original line-up was probably the most euphoric and enlightening show he's seen-IT BITES at the Hammersmith Apollo in April of 1990 (Yes,Geoff had introduced him to the Cumbrian Rock Wizard's).

Geoff originally South Manchester born,but spent most of his youth brought up in Carlisle started out on the Cumbrian pub & club circuit as a guitar player at age 18 years having been trained by local blues guitarist Olly Alcock (Known for his band 'England' in London featuring John Waite (Missing You)  in the 70's).

After a couple years he started songwriting and formed an original material band 'Tel Aviv' in the pop/rock genre advancing to Vocals & Guitar.Following the break-up of the band he sold his then home to finance 2 solo singles ('Stand Up' and 'London Life') and moved to London in June of 1987.With only indie acclaim he then joined/formed West London Rockers "Dream State City" where he met present drummer Mick Hatz on the tour circuit until they split in late  1991.

After a 2 year break fighting off glandular fever a solo CD release featuring a cover of the Otis Redding classic 'Dock Of The Bay' in 1994 took Geoff back on the road on the UK's acoustic circuit.

While recording some demo material with producer Paul Mex in 1996 the two teamed up to song write some dance material which became the 'Saved By Zero' project (see website in links section).

In September of 2013 Geoff then started to return to his musical roots of Rock and Blues including the likes of Whitesnake/Free/Bad Company/the Faces along with the Americana influences of Don Henley/Eagles/ZZTop and found his own direction which resulted in the album release called "One to One" in the Autumn of 2014.

Teaming up with Mick again they produced the  'Get Close' Album released in April 2016 along with building their 'Live' act and then with the release of  '4 Play E.P' in 2018,The 'Kids (Robbie & Kylie) E.P.' & the seasonal 'Christmas Time' E.P. in 2019 were well received that year.Mick announced his retirement with the 'Caught On The Outside' single early 2020.Geoff now embracing his solo acoustic work with 3 E.P. outings along with the next album which has now been released for 2020 called 'Big Town' with 'The Raw Rox Band'.