4 Play follows on from the rock and garage blues stylings of the duo’s 2016 album Get Close, which garnered favourable review from the likes of Liverpool Sound and Vision and Pete Feenstra for Get Ready To Rock!; Geoff Carne’s 2014 solo album, One To One, also received favourable review, including from FabricationsHQ.
On the EP the Carne and Hatz team are joined by Paul Mex (producer, mixer, bass guitar, piano).

As regards the direction of the 4 Play material and the differences between Geoff Carne and the Hatz as a live duo and the three-piece heard on 4 Play, Geoff Carne explained to FabricationsHQ that "on the EP we moved more into a riff and 12 bar blues route for the first three songs ('Down and Out,' 'Maybe Someday,' 'Medicine Man') before finishing with a piano mix of the rock ballad 'Forgiven,' which was a single last summer.
Our producer Paul Mex plays piano on the track and added some subtle bass lines all to the songs, making them more radio friendly.
Live, we remain the vocal, guitar and drums two-piece outfit Geoff Carnes and the Hatz!" 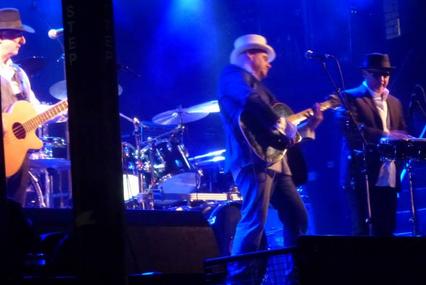 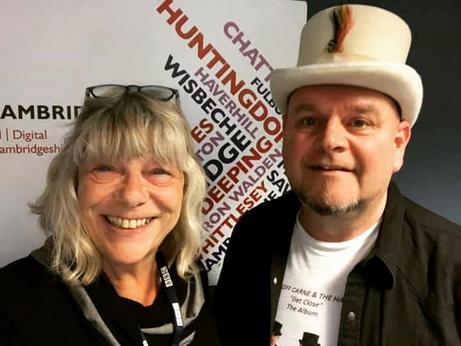 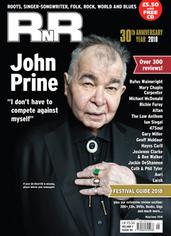 Below at the Picturedrome, Holmfirth, Yorks playing support for Snakecharmer & Focus 2015. Stuart McMahon (Left) on bass & Mick Hatz (right) on the bongos!

This album hits you in the face with a no-holds-barred barrage of blues played with passion. You have Geoff Carne on vocals, Mick Hatz on percussion along with Paul Mex on bass and electric piano. What you have on this collection is nine original songs by Mr Carne, which are all energetic and empowering. The opening cut Out In The Country has a powerful hypnotic riff, which is followed by the track Lost In You, again with a driving rhythm backdrop. Another Piece Of Me is a heartfelt blues ballad. Giving Me The Blues illustrates the driving vocal eloquence of Carne’s phrasing. Throughout the whole album, this lyrical excellence is evident with a vocal style is reminiscent of Free’s Paul Rodgers. Together with the Paul Mex’s bass-line and Mick Hatz’s drumming, this trio comes across as a force to be reckoned with. All this said, this album tended to me to be quite repetitive, lacking in light and shade, but still it is a brilliant showcase for Carne and the Hatz and wouldn’t stop me going to see them live. 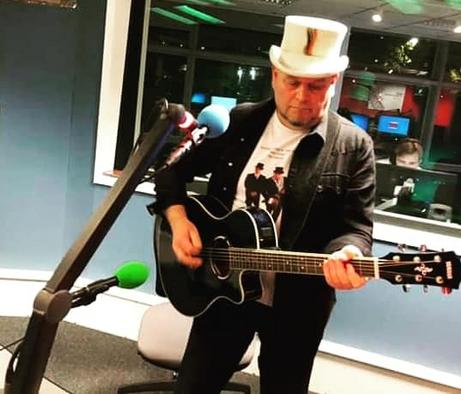 ​Geoff started the return to rock journey with the 'One to One' album (2014), then with drummer Mick Hatz on the Geoff Carne & the Hatz project to work on progressing the British Rock blues-driven genre. The release of the 'Get Close' album,'4 Play'/'Kids' EP's, and various singles up to their last release together 'Caught On The Outside' in February 2020 provides a good sample of their works.

Three "Acoustica E.P.s" have been released and a new collaboration with North London's "Raw Rox Band" courtesy of producer Paul Mex (Toyah/Robert Wyatt/Jive Records) on the  "Big Town" album have been recorded. 'The Raw Rox Band' is a collection of experienced session musicians who all worked in the once-thriving British Record Industry for major labels such as Island, Jive, and EMI.

Post lockdown has brought both the acoustica & 'Raw Rox Band' releases of the 'Shakedown' Album. The 'Love Gun' acoustica works were released on October 29th, 2021, and will be followed by the 'Love Gun' & 'Rock the Blues' E.P.s with the 'Raw Rox band' in the spring and summer of 2022 respectively.

​Major act support slots have included the likes of  'Snakecharmer','Focus' (Both at the Picturedrome.Holmfirth,Yorks) and 'Dr.Hook' (At the Watford Colosseum,Herts).